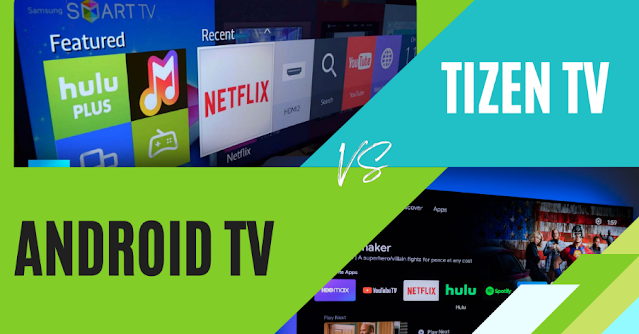 Given that Samsung controls close to 30% of the market for Smart TVs, a comparison of Samsung’s Tizen OS with Google’s renowned Android OS is obvious. Most enterprises partner with Android TV app developers for getting an app for their platform. What sets Tizen apart from Android, which is currently the most widely used and popular operating system and drives a substantial share of smart devices globally? We’ll compare Tizen OS with Android TV in this article.

Tizen in a Nutshell

Tizen OS, a Linux-based operating system, was developed by Samsung Electronics exclusively for use with Samsung products, including Smart TVs and Wearables. Tizen OS, which will exclusively function on Samsung Smart TVs, will be replaced by Wear OS, a variant of Android that will operate on wearables, in 2021 thanks to an agreement between Samsung and Google. Tizen OS, a Unix-like operating system with a heavy emphasis on C, C++, and HTML5, varies greatly from Android because it forbids the use of any apps created for Android. Therefore, it is very probable that you will need to develop a Tizen app, especially for a business platform if you intend to get in front of a sizable chunk of Smart TV customers.

Android TV in a Nutshell

2014 saw the release of Android TV, the year before Samsung created Tizen. This operating system’s primary goal is to link set-top boxes, digital media players, and Smart TVs with web-based TV devices. Android is used as the basis for the whole Android TV OS. It has been modified by many leading Smart TV manufacturers, notably Sony, to work as nothing more than a Smart TV middleware for respective goods. It is an operating system that makes use of Google Play’s APK package manager and is based on HTML, CSS, and JavaScript.

Tizen apps are also quite compact without losing audio-visual quality. Tizen and Android both offer automatic firmware updates, doing away with the annoyance of manual updates and settings. However, Android TV lacks Tizen’s automated connection to auxiliary devices.

Samsung devices are exceptionally popular for their enhanced user experiences. Tizen’s excellent UX can be partly blamed for Samsung’s success in the smart TV market. In addition to the vibrant audio and video performance that comes with Samsung Smart TV hardware, Tizen OS is suitable to leverage the best use of the cutting-edge technologies of Samsung to give users a Viewing experience like never before.

Simply put, Tizen OS is geared for watching TV, a feature that is currently not noticeable in Android TV. I’ll comment on this later, but I and other Samsung Smart TV owners can verify that Tizen seems more like a TV than Android TV. Do you recall a time when cable or DTH-supported TVs were the norm? We had the freedom to peruse the live channels and stick with the ones we enjoyed. Samsung Smart TVs using Tizen OS mimic that experience. Smart TV apps do in fact run online rather than through SVOD or live TV networks. However, these apps let you explore them like channels. Users can still surf TV applications because Tizen OS’s navigation bar only occupies 40% of the screen.

In my opinion, Android TV presents the Smart TV as a third streaming device, comparable to a smartphone or tablet. Imagine it as a giant tablet that is installed on a wall. While it does improve the usability of some services, such as gaming or screen-casting (made possible by Chromecast), it also takes away something from the comforting traditional TV experience.

Let’s face it, a lot of us have used Google Assistant before and are aware of its supremacy as a voice assistant AI system. Google Voice Assistant is featured in Android TV. It features a sizable database and voice recognition that is almost flawless. As a result, one may claim that the voice assistant feature on Android TV is really good.

There is a warning here for Tizen, though. Google Assistant can be used to seek out specific content on Android TV, whereas it can only be used to browse apps or channels in Tizen. This is a little disappointing because you can’t just say a movie’s name to watch it on your Tizen device. However, take note that Google Play Movies and YouTube are given priority in the search results on Android TV.

Tizen provides a more organized search bar along with a useful Guide functionality that makes navigating via Tizen devices very simple. With so many unsorted alternatives and a Google-centric search, Android TV’s navigation is not as simple.

In terms of app support, Tizen plainly falls short of Android TV. You have a large selection of app possibilities thanks to the hundreds of thousands of applications that Android TV supports. In comparison, there is a lesser range of apps available in the Tizen Appstore. Every Tizen app is accessible for free download, in contrast to Android TV, which delivers a choice of both free and paid apps from the Playstore.

Tizen features a built-in web browser, whereas Android TV does not, which is noteworthy to note. Tizen includes the Samsung Internet Browser for a comfortable web browsing experience. Despite Chrome, a trademark Google Web Browser being one of the best ones currently available, Android TV does not come with a built-in web browser. You can certainly install Chrome on any Tizen or Android TV set to get the same wonderful Chrome experience everyone adores.

Even if the suggestions are a little off at first, Android TV has a sophisticated auto-suggestion algorithm that learns from your preferences over time and can provide you with some really good content recommendations. Even less advanced than Android TV’s auto-suggest, Tizen OS lacks the ability to swiftly access commonly used apps.

While Tizen OS, at its best, may make a Smart TV feel like a huge mobile phone, Android TV does have the power to instantly change any Smart TV unit into something akin to a gaming console. Tizen OS is definitely not designed for gaming. On Tizen, there are about 60 games. These games are simple and usually meant to be playable using mobile devices. Thousands of games, which are very engaging and also have cutting-edge graphics and gaming controls, are available for Android TV, on the other hand. Despite having a chipset that is equal to Tizen’s, the gaming capabilities of Android TV devices are largely limited.

Given that Samsung is primarily an electronics company, it makes reasonable that it would prioritize high-quality hardware. To basically give Smart TV viewers an immersive TV experience, Tizen OS takes good advantage of the leading Samsung hardware. On the other hand, Android TV places added emphasis on fantastic streaming than on great TV. In the end, users’ choices must be based on the kind of experience they desire from their Smart TVs. Tizen and Android TV are both cutting-edge platforms with promising futures in specific markets. The market shares of the two operating systems are simply one aspect of what makes them superior.